Jinan has the option to be world's first city that has realized an international orientation standard, an idea from a Munichian inventor to simplify and harmonize worldwide all orientation means: signage, cartography, navigation devices and verbal expressions.

Within this city, it is (will be) possible to find any target with easy brain work, that means

which are easy to understand if you associate the city with a clock as follows:

Considering the distance to m0 as r = radius also in steps of blocks of houses, logical position codes StatusQuo© (where you are) for targets, buildings, crossings etc. come into existence, e. g. as shown on the picture:

The prefix JIN says that the position code is valid for Jinan.

"r" is a numbering starting FROM m0,

"m" is a north-direction-based numbering AROUND m0

and this simple methode covers a gigantic market gap:

Natural Cartography©: a map with such a polar grid has innovative characteritics, see www.volksnav.com/map  Please be aware about the fact that some of the above mentioned targets aren't on map but the codes make it possible to imagine where they are situated !!

The local navigation with the help of such codes is called VolksNav©. As proceeded today with house numbers, VolksNav© is nothing else than the major/minor comparison between "r" and "m" values:

so you must go

This may seem to be unfamiliar, but the orientation based on cardinal points is used for some thousand years and imaginary clocks are used by soldiers, boy scouts, pilots, blind people etc. for more than 100 years. On a real situation, VolksNav© can be learned within few minutes, that means, faster than the most seeking times.

- within the whole globe, see  www.watchrose.com. This method allows to address in a worldwide harmony

etc . Acc. to this, the international City Code of Jinan is

Just comparing the codes for example of Jinan and

it is possible to evaluate that

- the position of  Jinan is "later" and closer to Munich than Qingdao, more exactly 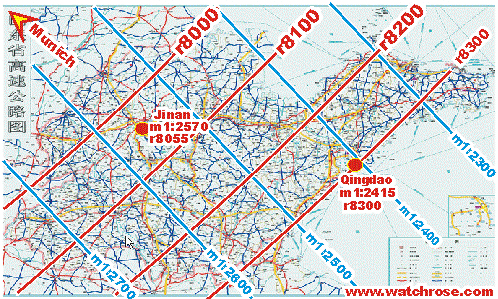 On city entrances, road exits, road crossings, expressway sections etc., the signage could look like this: